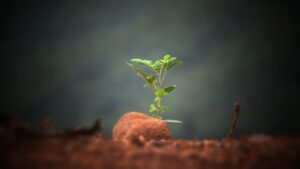 We all start some where.

A flower starts as a seed.

The seed is planted in the ground.

In the dark and wet dirt – the seed starts its bleak existence.

It sees nothing, and often no one. Slowly breaking free of the confine of the bones of the seed and reaching up – reaching as high as it can go.

Suddenly it feels the warmth of the sun and the light.

The seed has finally made it.

It rises up and out of the earth to take in the new world around it.

This new level the seed has obtained, while higher than ever achieved – is not enough.

The warmth of the fresh air, while freeing and liberating – gave taste for something else. Something more.

So that seed – which has turned into a green leafy stalk – soaks up the sun, the fresh air, the water.

It continues to grow until it blossoms into a beautiful flower.

This seed – which has risen from the deep dark depths of the earth – has taken in everything its world had to offer around it, and utilized that to grow and blossom into what it is now. A beautiful flower.

The same can and is done for people.

People soak in what they know and learn of the world around it.

They use what the learn and take from life to grow – and to blossom.

Sometimes its not the light and the warmth of the air that help us to grow and flower – its the people around us.

They sow seeds of their past, their present, and their future into the lives of those around them.

Having a hand to help shape those lives around them they are lucky enough to touch.

In the security industry, especially at Sentinel – we take pride in helping to sow the seeds in others.

They say you are only as strong as your weakest link.

The chains that may have otherwise broken, hold fast with the help of those they are surrounded by.

In security this theory is especially true.

When acting as a team, there needs to be strategy.

There needs to be designated roles or positions.

There needs to be a well thought out plan with everyone on the same page.

Those that aren’t as well versed in their roles or positions won’t be able to successfully and competently complete the task unless they have the support and aid of those around them.

By imparting the knowledge of previous experiences and offering the full support of the team – the person that may be otherwise uncomfortable or better yet – unsure – of the task at hand, will feel confident. They will rise up – embrace the sunshine and warmth of the world and the task around it, and blossom into a competent and strong member of the team.

Gardens are beautiful for the vast array and variety of flowers that it encompasses.

Each slightly different than the one next to it. But all beautiful in their own way.

All of which have grown from the same dark place. Seeds, planted in the earth – reaching for something higher. Something beautiful.

Inside, we’re all flowers. Yearning for our that beautiful season in our lives.

We all need the light and the support of those around us.

Her passions include World travel, having visited every continent.

Check out some incredible footage by @gn_funkertac

Are you Entitled? Do you feel something is owed t

A big shout out to these 2 rockstars @summervill

HUMILITY Can it be a strength? And in such a com